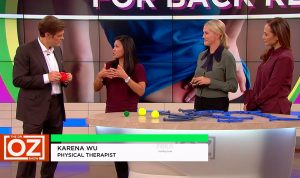 While many remember him as having an impressive physique, even in later years, Joseph Pilates, stalwart inventor of the popular Pilates Method of exercise, started out in life as a rather unhealthy child. In order to improve his own physical fitness, he spent a good deal of time studying anatomy and developed himself as a body builder, gymnast, wrestler, boxer, diver and skier. Pilates successfully remade himself into a healthy, strong and fit individual, and remained that way until he passed away in 1967 at the ripe old age (for the times) of 83. 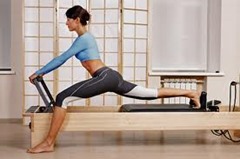 Living in England at the outbreak of WWI, Pilates found himself forced into an internment camp where he started to invent what would become as the Pilates mat method in order to keep himself in good shape. Later he began to work with injured camp detainees, rehabilitating them with his various strengthening techniques and exercises. Resistance equipment he created out of beer keg rings and bed springs eventually formed the basis for the modern Pilates equipment known as the magic circle and the reformer.

At the core of the Pilates Method is the balanced, symmetrical development of the entire body, emphasizing core strength, flexibility and balance. By simultaneously strengthening and lengthening the muscles, Pilates exercises stabilize the body’s core, promote balance, symmetry, breathing control and efficiency, all desirable traits for a serious runner. 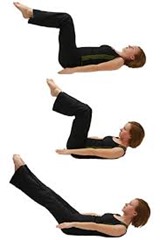 Running movements are primarily in a forward direction, or sagittal, consequently runners tend to have very strong quadriceps, somewhat weaker hamstrings and glutes, and are very weak in the side-to-side movement muscles, particularly the inner and outer thighs, also known as the abductors and adductors. These are the very muscles needed, however, to help us keep our hips and knees in line with our ankles when we run in order to maintain a balanced, even stride.

When inner thigh muscles are weak, runners tend to roll their feet outward, causing ankle, knee and hip strain. Our outer thigh muscles attempt to compensate for this by pulling the leg into inward rotation, causing the band of fibrous tissue that runs from down the outside of our thighs to stabilize our knee and hip joints known as the IT band to slip over the knee or hip, causing serious inflammation, irritation and pain. ITB syndrome is the most common injury experienced by serious runners, and can easily be avoided by strengthening the inner and outer thigh muscles through Pilates exercises.

Similarly, runners who practice Pilates are less likely to develop injuries such as plantar fasciitis and shin splints, which are largely caused by overpronation of the feet, inflexible calf muscles and tight Achilles’ tendons. Emphasizing flexibility, alignment and balance, Pilates training helps a runner to develop and maintain a smooth, even gait with hips, knees and ankles perfectly aligned and no foot pronation in either direction. Having a strong core, evenly developed musculature and acute awareness of gait and balance is one of the major benefits runners receive from Pilates training.

Be Proactive, Not Reactive

By being proactive and heading off injury with a comprehensive, total body strengthening program, you can save yourself a good deal of pain, frustration, down time and even money further down the road!