How do chefs handle the pressures of the kitchen? We spoke with several chefs who shared how they handle the heat. 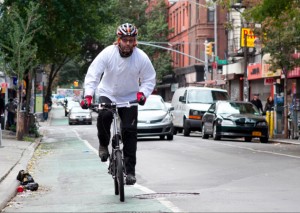 But from a chef’s perspective, there’s another reality: that of trying to find time to eat well while being around food all the time, working while hunched over all day, in sweltering kitchens, day after day, and not letting one’s body go to pot in an industry known for working long, hard, hot hours. And, also, in the middle of the hectic environment, how to keep one’s sanity.

How do chefs handle the pressures of the kitchen? We spoke with several chefs who shared how they handle the heat.

When chef Wylie Dufresne describes the injuries he has sustained over 30 years in food industry (he’s now 43 and started at 11), it sounds like a medical chart rundown: plantar fasciitis in the feet, knees slowly giving out; hip problems; tearing both hamstrings (due to an injury while playing softball but exacerbated by the tightness in his legs, he said); tightness in his lower back, from 20 years spent hunched over; a herniated disk in his back; shoulder surgery; neck problems; with the most chronic injuries in both his forearms, tennis elbow and golfer’s elbow.

He says he is at one end of the spectrum in terms of the number of injuries, but that sustaining chronic injuries is not unusual for any chef who’s been in the industry by the time they’ve spent 20 years working.

Finding the time to carve out for chefs is extremely hard, said Dufresne’s physical therapist Karena Wu, who has been treating him since 2004, once a week for maintenance, but more often as injuries call for it.

More often than not, the first thing she knows that chef clients do at the end of their shift, late a night, is to get a drink. “It’s like a snowball effect. You’ve worked 12 to 14 hours, which is a really long shift and you have a cocktail, which depresses your system.”

It doesn’t do anything positive for the body, she said, except to provide a brief break mentally. “It’s not going to help motivate you in the morning to go for a run and stretch or do some strength training before you start your shift again.”

For Dufresne, it’s only been recently, with marriage and parenthood of children ages 1 and 4, that he’s tried to find a balance, and he strives to stay fit so he can be as healthy as possible—working out and biking to work— when he does get to spend time with his family. “It’s when I’m running after a 4-year-old and I’m not winded that I see the value of [fitness].”

Before that, the usual routine of working all day and then going out eating and drinking and going to sleep worked well for him. “That’s all you do for many, many years and you do that very happily.”

When he does get some time off just to himself, he unwinds by going to the movies, which enables him to sit in the dark and not think of many things, he said.

“As you get older and you have a family it gets harder to find those moments. But is also gets more important. It’s about balance but for me, when I’m not working I want to spend as much time as I can with my family. That’s restorative as well.”

Some chefs might look for an outlet that takes them far from the world of the kitchen, while for others, just the opposite is true.

Anthony Martin, 33, executive chef at Tru in Chicago, has followed a disciplined regimen for about seven years that he never fails to miss: he wakes up, checks email, and launches into an hour’s intense workout at home, to the tune of 25 push-ups a minute and 1,000 push-ups per session.

It’s not just a physical workout, though. It’s during this crucial hour that his creativity comes out, so he keeps a menu close by to make notes.

“The more I get into the workout, the more strenuous it is, the more active my thoughts get,” he said.

On some days, he ends up with about 30 new dishes sketched out.

For chef Chris Santos (Beauty & Essex, The Stanton Social), traditional gym workouts just don’t work for him. His passion is boxing, and he trains at Gleason’s Gym in Brooklyn, alongside boxing pros—the equivalent of training at basketball with the Knicks, if you could.

Santos grew up watching boxing at his grandfather’s knee and has been training seriously since 1993.

He harbors no thoughts of payroll when he’s boxing, he’s wholly focused. He gets “crazy strength from doing this. And there’s no way I’m eating garbage food and drinking a bunch of beer. It keeps me on point.”

Whereas some chefs seek relief in activities that are equally intense or adrenaline-driven as the kitchen, Zizhao Luo, the executive chef at Radiance Fine Asian Cuisine, takes another path: meditation. Luo, who is his mid-40s, values the tranquility that it gives him.

He believes being both healthy and calm is responsible not just to himself but to his customers too.

“When a chef is calm,” he said, “The calmer he is, the better the dish he’s able to make.”

Luo wakes up shortly before 5:00 every morning to practice the meditation and exercises of Falun Dafa, an ancient Chinese body-mind practice. He is one of only a couple of chefs whom I interviewed who felt no chronic pain or aches anywhere in their bodies.

He strives to keep a positive and uplifting spirit, and be understanding of others. With that mindset, “Stressful situations don’t become a burden.”

Luo was an accomplished and recognized chef long before he started meditating. He was somewhat of a young prodigy, taking up the position of executive chef of Kai Kong, one of Beijing’s most prestigious hotels, at the age of 21.

With the beach a block away from his front door in Manhattan Beach, Calif., Keith Roberts, 58, chef at the Loews Hotel Santa Monica, doesn’t have to go far to hit the waves.

“Surfing is a very physically demanding sport. It’s the only sport you have to work for before you get to have fun,” he said.

Years ago he gave up smoking as a New Year’s resolution. But he then put on 40 pounds within a year and a half. He needed to work out and lose the weight but an obstacle stood in his way. “I needed to find a gym between the restaurant and the bar,” he said. It was all too easy to grab a couple of beers after work (“a couple of beers makes you hungrier so that means more weight, too.”)

For his following New Year’s resolution, he gave up drinking. These days, he’s not a teetotaler, but if he goes out and has a couple of drinks, he finds he’s too tired to go surfing in the morning. “The love of surfing drives a lot of it. The whole picture of staying in shape, it keeps me in better health, I’m a better husband, a better father. It all fits together.”

When Chef Carmen Rodriguez (executive chef at Fuego! in Santa Fe), 45, recalls the days of cooking with an M-16 on his shoulder when deployed in the field—his last tour of duty was in the Air Force in Egypt right before Desert Storm, the pressures of the kitchen seem to recede. He was feeding the hundreds and thousands of troops in unfriendly places. Somehow, even his busiest nights at Fuego! just can’t compare.

“Most kitchens are hectic and utter chaos,” he said. “I don’t allow that craziness in my kitchen.” He makes a point of teaching all his staff how to handle themselves on the line.

He was diagnosed as a diabetic and said he ignored it for a long time, until he couldn’t anymore. “I wanted to be around to dance at my daughter’s wedding,” and he’s ever since cut back on processed foods and animal fats. He also works out six days a week.

Rodriguez also has an unusual practice that centers him.

“I do meditate. I don’t go home and watch television. I don’t go home and down a bottle of scotch. I sharpen my knives.” He pulls out his large collection, gives them a hot water bath and sharpens them. “It clears everything out of your head. That repetitive motion relaxes me.” He does this for two hours, whenever he needs to, often once a week.

The Ultra Marathoner and Yogi

Chef Gregory Gourdet (Departure) in Portland (by way of New York) remembers clearly the days of yore, when he’d order a bacon cheeseburger and mac ‘n’ cheese at 2 a.m. “I can’t even imagine doing that now.”

For Gourdet, it’s all about making conscious decisions. He’s been on the paleo diet for some time now, and as an inveterate runner, recently completed a 50-mile race. “It was supposed to be 100 miles.” Still, he knew if he set his goals high, he would make some progress on his goal.

He takes into account the seasons his restaurant goes through—taking advantage of less busy times to set fitness goals for himself.

Last year, during an insanely busy summer season, he found he had gained 20 pound in four months. “By the end of September, I was overweight, sluggish, tired, my back started hurting.”

It was so busy he’d stopped his yoga and strength training. He told himself he “should go on an exercise bender” and posted a challenge on Facebook to others in the industry in Portland: exercise for 30 days in a row, for 30 minutes a day, up until Thanksgiving. “It’s great community support,” he said, and makes fitness fun. This year’s challenge just started this past Tuesday.

He finds working out a great way to “let the night go and have some personal time.”

“Even at a busy gym, I can still find a place I know that’s better for me. I have a sense of stillness. I’m taking myself out of my work environment and challenging myself in a different way and achieving my goal there. It sets the tone for the rest of your day.”

Yoga is also important to him to help his back and opening up the front of the body. “When you’re on your feet all day, hunched over, also your wrists and your arms, it’s really kind of brings your body down.”

Chef Einat Admony (Babaloosta, Taim), 42, relishes the beauty of the outdoors and started running at her local park in Fort Greene this past summer.

But her favorite exercise is boxing. She once had a session with her trainer, but had just had a fight and was feeling upset. “My trainer said, ‘I think I have something for you.’ He brought out a pair of gloves. “I like that I can punch,” she said. It offers her relief and a good cardio workout, and it makes her refreshed when she gets into the kitchen.

As for what keeps her happy and balanced, she said, “Cooking is my therapy.” After a 12-hour day at the restaurant, she gets home and still wants to cook. When she is stressed, she cooks. Preparing Friday night Shabbat dinners for anywhere from 10 to 20 people is a tradition.

Having two children also encourages her to prepare healthier home meals that include a lot of vegetables. “My kids are carnivores,” she said.